This post is the third one in the series Fiction

The rooster crowed loudly, indicating the onset of morning. This was a cue for the residents of the neighbourhood, who were instantly up and about. The sound of suprabathams soon filled the air and beautiful kolams decorated the street. A bright, sunny day dawned.

In a short while, motorists were battling for space with pedestrians as there was no pavement. Moreover, roadside vendors occupied most of the space in the narrow street. Women in cotton sarees and flowers in their hair could be seen bargaining with the vegetable vendors. Men in formals sped away on their motorbikes. School children chatted nineteen to a dozen as they waited for the bus. Noise, chaos and commotion prevailed everywhere. The scene on the busy street was a sight to behold. 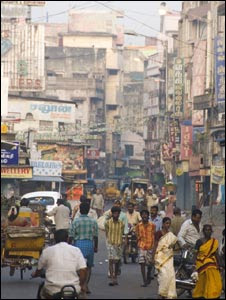 As the hours ticked away, darkness descended and street lights sprang to life.
The scene on the street hardly changed till late in the night. After a while, the lights in the homes began to disappear and the traffic thinned down gradually. It was time to sleep and rest. Another day awaited.

Note: Image sourced from Google.
Posted by Deepz at 2:30 AM