The Boss of Comedy (Movie review)

This post is a movie review of a Tamil movie that I watched many days ago. 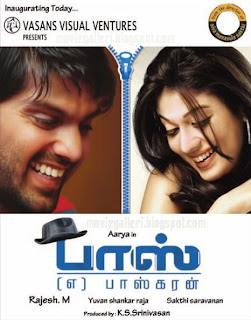 This movie is the second venture of director Rajesh who previously gave us the entertainer "Siva Manasula Sakthi" (SMS). Boss is an all and out comedy flick. The comic duo Arya and Santhanam have ensured that the audience has a gala time throughout the movie. Almost 97% of the movie comprises comic situations which keep you laughing throughout.

Bhaskaran a.k.a Boss(Arya) is a carefree youth who hasn't completed a degree in spite of multiple attempts. He enjoys his life roaming about aimlessly. His only friend is Nallathambi(Santhanam) who runs his own salon. They hang out together always. Boss falls in love with Chandrika(Nayanthara), who is his brother's wife's sister. She slowly but hesitatingly responds. But their union is not favoured by anyone since Arya is irresponsible and jobless. How he goes about finding a livelihood, proves himself and wins Nayanthara's hand, forms the crux of the story.

The first half of the movie is a fun ride, but the second half falters a bit at the end.
Santhanam is the one who holds the movie on his shoulders. His comic timing and dialogue delivery are praiseworthy. Arya as the dimwitted hero has played his part well. Nayanthara looks tired,old and hag like.But she has acted well. The supporting cast has done a good job too

Yuvan's music has some hummable beats though it is not upto his usual standards. The best are "Yaar Indha Penn" sung by Haricharan and "Thathi Thavum Paper" sung by Karthik

This is a movie in which you should forget everything and just savour the moment. Don't look for a story or logic or anything else. Just focus on having a good time and you definitely will!