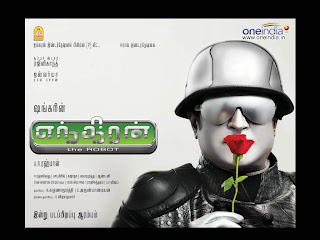 Here's another movie review. But this movie is like no other! It was one of the most awaited movies of the year.

Not only is this the costliest (150 crore budget) Indian film ever made so far, it is also an attempt to produce world class movies in India. The best in the business have been roped in to ensure that the film is exceptional -Academy Award winner  AR Rahman(music), Oscar Winner Resul Pookutty (sound mixing), Sabu Cyril(Art direction),Peter Hein (Action direction) and they definitely do not disappoint!

The film stars Super Star  Rajnikanth in a double role as the scientist Vaseegaran and also his creation Chitti the robot. Aishwarya Rai plays  Sana, the love interest of Vaseegaran.

The storyline:
Vaseegaran creates a robot after 10 years of hard work. It is his dream to deploy similar robots in the Indian Army. The robot named Chitti is an awesome machine. It performs many feats, but it does not possess an understanding of human psyche, behavior and emotions.Stating this as a reason, Professor Bohra (Danny Denzongpa), who is the head of Artificial Intelligence Research and Development Institute (AIRD), does not approve the robot for use in the army. So Vaseegaran takes pains to induce 'feelings' to the robot. After he succeeds in doing so, things go awry as Chitti falls in love with Sana. The drama that follows  forms the second half of this entertaining film.

No wonder that Rajnikanth is a SuperStar. He excels as Chitti the robot and specially as the evil version of Chitti. This is one of the best negative roles he has played so far. Aishwarya Rai doesn't have much to do but she still looks ravishing. Danny Denzongpa is good. The comedy track of Santhanam and Karunas does not do justice to the film.
Music by AR Rahman is in tune with the theme of the film. "Irumbile oru Idhayam" and "Kadhal Anukkal" are the best tracks.
Action sequences and special effects are exceptional. This is truly a treat to watch and a first for Indian cinema.
This is one movie which both adults and kids will love. If you haven't watched this film yet, go for it. An enthralling experience awaits you!