World No Tobacco Day (WNTD) is observed around the world every year on May 31.
This annual event informs the public on the dangers of using tobacco, the business practices of tobacco companies, what WHO is doing to fight the tobacco epidemic, and what people around the world can do to claim their right to health and healthy living and to protect future generations.

Tobacco industry interference is the theme of WNTD 2012, with the aim to expose and counter the tobacco industry's brazen and increasingly aggressive attempts to undermine global tobacco control efforts. 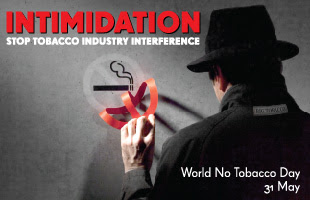 About World No Tobacco Day

World No Tobacco Day  was created in 1987 by the member states of WHO. It encourages a 24-hour period of abstinence from all forms of tobacco consumption across the globe.

Some Facts - Be Aware
Quitting Tobacco 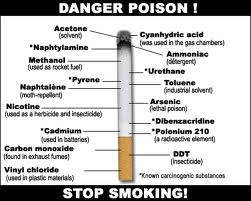 Quitting tobacco is not easy as tobacco dependence is a cluster of behavioural, cognitive and physiological phenomena. Very few tobacco users can successfully quit the habit in their first attempt.

Social norms do not support tobacco users to quit in some high-burden countries. For example, the Global Adult Tobacco Survey (GATS) shows that: In India, about 26% of current adult smokers plan to or are thinking about quitting in the next 12 months.

The WHO urges countries to protect public health policies from commercial and other vested interests of the tobacco industry. Today it is releasing a technical resource paper and global brief  to help guide countries on ways to combat tobacco industry interference. The paper covers a range of issues including:
Information courtesy: World Health Organization
Image courtesy: Google Images

Observe World No Tobacco Day- Quit Smoking , make the world a better place to live in!
Posted by Deepz at 2:58 PM

Email ThisBlogThis!Share to TwitterShare to FacebookShare to Pinterest
Labels: health

its a good article...actually...i dont smoke..